The iconic oceanfront hotel is situated on the Ala Wai Yacht Marina at the edge of Waikiki and just a short stroll to Ala Moana Shopping Center and 2 blocks to the Hawaii Convention Center. Each room features extra spacious accomodations with full kitchen and a large 120 sq. ft. lanai offering fabulous views. The hotel walkway from the lobby leads to the Duke Kahanamoku Lagoon and beach.

The iconic Ilikai Hotel & Luxury Suites is defined by its bold architecture and abounding presence. Contemporary, chic accommodations provide all the comforts of home, including full-sized kitchens and premium bedding. Think of the Waikiki Luxury suites as an added touch of luxury to your Ilikai experience, where you're just steps away from white sand beaches, high-end shopping and your own version of paradise.

Set on Ala Wai Boat Harbor, this upmarket, high-rise hotel is 0.6 miles from Kahanamoku Beach and 1.7 miles from Honolulu Zoo.

There's an Italian rooftop restaurant with panoramic views, and a casual bar and grill. There's also a spa, a 24-hour fitness center and a local shuttle service, plus outdoor pools. A resort fee applies.

12.5 kilometers from the Honolulu International Airport, and a 5 minute walk from Ala Moana Beach Park and Duke Kahanamoku Beach & Lagoon. 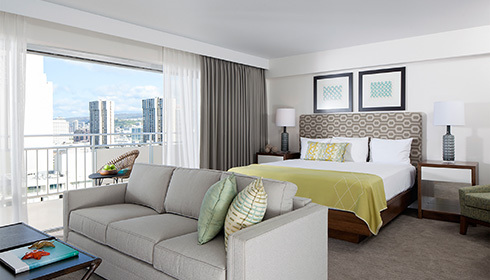 Honolulu, on Oahu’s south shore, is the main gateway to Hawaii and a major gateway into the United States. The city is a major hub for international business, military defense, as well as famously being host to a diverse variety of east-west and Pacific culture, cuisine, and traditions. The name Honolulu means "sheltered harbor" or "calm port".

Hawaii is the newest of the 50 U.S. states (August 21, 1959), and is the only U.S. state made up entirely of islands. It is the northernmost island group in Polynesia, occupying most of an archipelago in the central Pacific Ocean, southwest of the continental United States, southeast of Japan, and northeast of Australia. Hawaii’s natural beauty, warm tropical climate, inviting waters and waves, and active volcanoes make it a popular destination for tourists, surfers, biologists, and volcanologists alike. Due to its mid-Pacific location, Hawaii has many North American and Asian influences along with its own vibrant native culture. Its capital is Honolulu on the island of Oʻahu.