Breakfast] Morning at leisure. In the evening visit Shwedagon Pagoda at sunset. Shwedagon Pagoda: the highlight of any visit to Yangon, this pagoda towers over the city and is the most sacred spot in the country, built to house eight hair relics of the Buddha. The Shwedagon and surrounding shrines are particularly beautiful during the sunset hour, as the golden stupa reflects the changing colors of twilight. Overnight in Yangon.

[Breakfast] Visit Sule Pagoda: this 48 meter high golden dome was used by the British as the nucleus of their grid pattern for the city when it was rebuilt in the 1880s. The pagoda’s peculiarity is its octagonal-shaped stupa, which retains its shape as it tapers to the spire. Visit Botataung Pagoda: this paya was named after the 1000 military leaders who escorted relics of the Buddha brought from India over 2000 years ago. This ancient monument was completely destroyed during WWII. It was then rebuilt in a very similar style to its predecessor, but the zedi is hollow and one can walk through it. Visit Chaukhtatgyi Pagoda: The reclining Buddha at Chaukhtatgyi Pagoda in Yangon which is almost as large as the enormous figure of Shwethalyaung Buddha in Bago. It’s housed in a large metal-roofed shed on Shwegondaing Lan, only short distance north-east beyond the Shwedagon Paya. Surprisingly, this huge figure is little known and hardly publicised at all- if you can’t go to Bago to see the Shwethalyaung, then don’t miss this colossal image. Visit National Museum: a museum with several interesting exhibits, especially the 8 meter high Sihasana Lion Throne, used by King Thibaw Min, the last Burmese king, and returned to Burma in 1908 by Lord Mountbatten. The main floor contains jewellery, old black and white photos of Mandalay Palace and Yangon, royal relics, Hintha opium weights and inscribed tablets.Visit Bogyoke Aung San (Scott) Market: (closed on Mondays and public holidays): also known as Scott Market, this building contains over 2000 stalls and is the best place in Yangon to browse through the complete range of local handicrafts. Overnight in Yangon.

- Began [Breakfast] Transfer flight fron Yangon to Began. Enjoy sightseeing in Began. Shwezigon Paya: King Anawrahta started the construction of the Schwezigon Pagoda to enshrine some relicts of Buddha. The construction was finished by his successor, King Kyansittha between 1086 and 1090. Originally the Shwezigon Pagoda marked the northern end of the city of Bagan. The stupa’s graceful bell shape became a prototype for virtually all later stupas over Myanmar. Gubyaukhyi Temple at Wetkyi- Inn: This Temple was built in the early 13th Century and repaired in 1468. The great colorful painting about the previous life of Buddha and the distinguished architecture make this temple an interesting site for a visit. This temple is not to be confounded with the Gubyaukgyi Temple in Myinkabe. Ananda Pahto: one of the finest, largest, best preserved and most revered of the Bagan temples. Thought to have been built around 1105 by King Kyanzittha, this perfectly proportioned temple heralds the stylistic end of the Early Bagan period and the beginning of the Middle period. Gubyaukgyi Temple at Myinkaba: Built in 1113 by Kyanzittha son Rajakumar, this temple is famous for its well-preserved Stuccos from the 12th century on the outside walls. The magnificent paintings date from the original construction of the temple and are considered to be the oldest original paintings in Bagan. Manuha Temple: The Manuha Temple was built in 1059 by King Manuha, the King of Thaton, who was brought captive to Bagan by King Anawrahta. It enshrines 3 seated and one reclining image Buddha. The temple was said to be built by Manuha to express his displeasure about his captivity in Bagan. Shwesandaw Paya: In 1057 King Anawrahta built this Pagoda following his conquest of Thaton. This is the first monument in Bagan, which features stairways leading up from the square bottom terraces to the round base of the Stupa. Lacquerware Workshop: the villages around Bagan are known for producing the finest lacquerware in Myanmar. Stop by one of the workshops and learn about the painstaking process of laquerware making and decoration. Sunset over Began; enjoy a panoramic view of the sun setting over the plain of Began from one of the pagoda platforms. Overnight in Began.

[Breakfast] Excursion to Mount Popa. A curiously cylindrical hill rising sharply from the surrounding plain, Mount Popa is considered to be the home of Myanmar’s most important nats (spirits). Visitors ascend up a winding covered staircase encircling the mountain, observed by the curious monkeys that populate the area. At the top is a monastery and temple complex, with shrines to the 37 nats and a spectacular view over the region. Overnight in Began.

[Breakfast] Transfer flight from Began to Mandalay. After arrival, enjoy sightseeing in Mandalay. Visit Mahamuni Paya: originally built by King Bodawpaya in 1784 when a road paved with bricks was constructed from his palace to the paya’s eastern gate. The centerpiece of the shrine is the highly venerated Mahamuni image that was transported to Myanmar from Mrauk U in Rakhaing in 1784. Visit Shwenandaw Kyaung: a monastery of great interest, not only as a fine example of a traditional Burmese wooden monastery, but as a fragile reminder of the old Mandalay Fort. At one time this building was part of the palace compex, and was used as an apartment by King Mindon and his chief queen, and it was here that he died. After Mindon’s death, King Thibaw Min had the building dismantled and reassembled on its present site in 1880 as a monastery. Visit Kuthodaw Paya: the central stupa here was modeled on the Shwezigon Paya at Nyaung U near Bagan. Building commenced in 1857, at the same time as the royal palace. The paya is dubbed ‘the world’s biggest book’, for standing around the central stupa are 729 marble slabs on which are inscribed the entire Tripitaka. Visit Mandalay Hill: an easy climb up the sheltered steps bring one to a panoramic view over the palace, Mandalay and the paya-studded countryside. The famous hermit monk, U Khanti, is credited with inspiring the construction of many of the buildings on and around the hill in the years after the founding of the city.

[Breakfast] This day tour visits three former royal capitals, each with its own unique atmosphere. In the morning, drive to Amarapura, and visit Mahagandayon Monastery; every day at mid-morning, monks and novices line up to receive their daily offering of alms and food from faithful Buddhists. Next, head to Sagaing, the spiritual center of Myanmar. Hundreds of stupas, monasteries, temples and nunneries are to be found in Sagaing Hill, sometimes known as a living Bagan. Thousands of monks and nuns retreat here for meditation and contemplation. Stop at some of the most famous temples, such as Sun U Ponya Shin Paya, U Min Thonsei Paya and Kaung Hmu Daw Paya. Cross the river by ferry to Inwa (Ava), situated on the banks of the Irrawaddy River. Once a royal capital, Inwa (Ava) is now a quiet rural oasis. Enjoy a leisurely Horsecart Ride around the peaceful countryside, briefly visiting Bagaya Kyaung, a beautiful teak wood monastery, Maha Aungmyay Bonzan Kyaung, and Nan Myint Tower. On the way, stop and observe how local artisans make the famous alms bowls out of iron. Finally, return to Amarapura, to end the day at U Bein’s Bridge, a picturesque teak bridge which extends over one kilometer across Taungthaman Lake. At dusk, the bridge teems with monks and local people as they stroll home or linger to enjoy the colors of the sunset. Overnight in Mandalay.

[Breakfast] Transfer by flight from Mandalay to Heho and then by vehicle from Heho to Pindaya. Visit the Pindaya Caves, ensconced in a limestone ridge overlooking the lake; they harbour more than 8000 Buddha images made from various natural elements. Moving on, visit Shwe U Min Paya, a cluster of stupas, a place where Tabaugn festivals (Feb/Mar) are held for the new full moon. Overnight in Pindaya.

[Breakfast] Vehicle travel from Pindaya to Inle Lake and transfer by boat to the western shore of the lake where a stairway leading to the hidden Indein temple complex is located. Also visit Phaung Daw Oo Pagoda, Inn Paw Khon Village (lotus and silk weaving) and the Nga Phe Kayung Monastery. Overnight in Inle Lake.

[Breakfast] Excursion by boat on Inle Lake. Travel by boat to the western shore of the lake to a stairway leading to the hidden Indein temple complex. Located on the shore of the lake, this site consists of hundreds of small stupas overgrown by moss and greens. Transfer by boat; by vehichle from Inle Lake to Heho; flight from Heho to yangon; transfer to hotel. Overnight in Yangon.

[Breakfast] Day at leisure until transfer to the airport in the evening for a homeward flight. 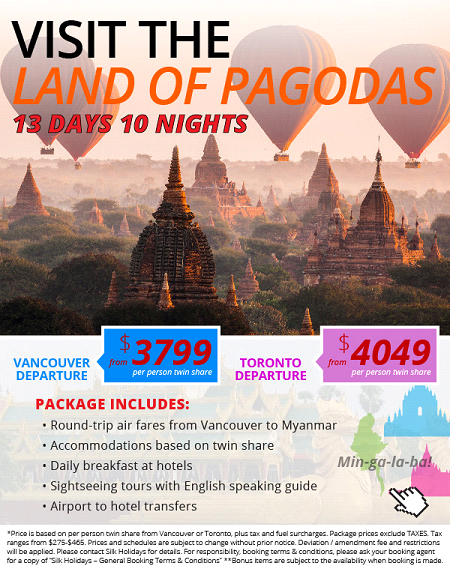