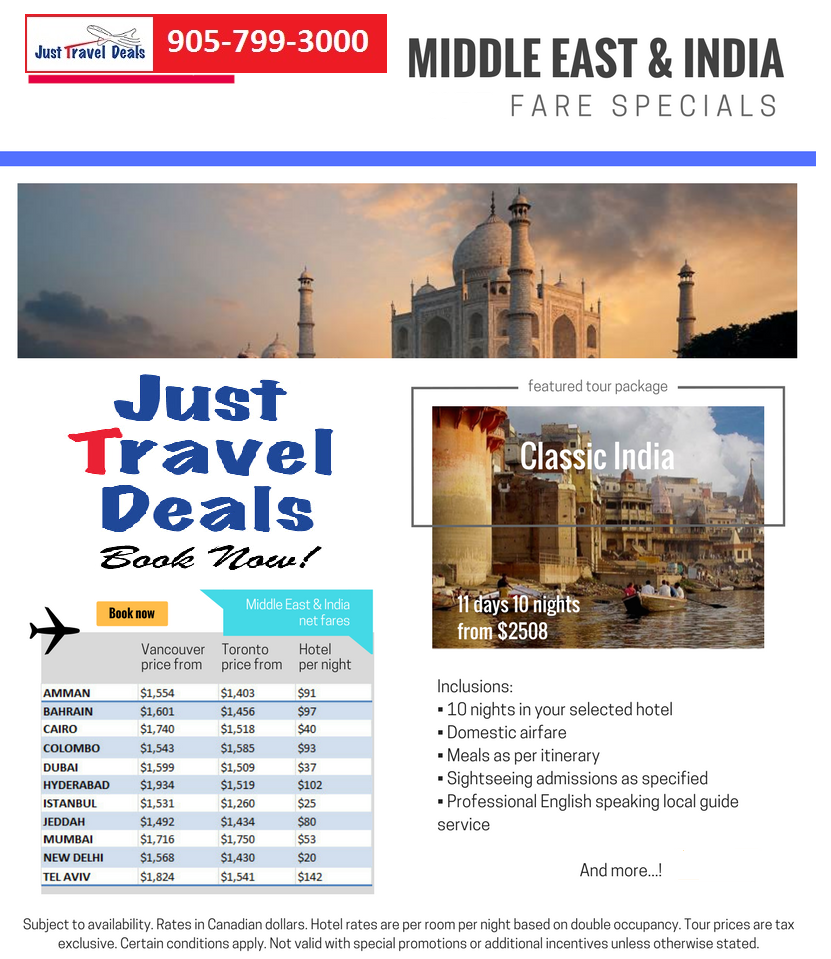 527822
Terms, conditions and restrictions apply; pricing, availability, and other details subject to change and/ or apply to US or Canadian residents. Please confirm details and booking information with your travel advisor.

You will visit the following 11 places:

Jeddah or Jiddah, is a Saudi Arabian city located on the coast of the Red Sea and is the major urban center of western Saudi Arabia. It is the largest city in Makkah Province, the largest sea port on the Red Sea, and the second largest city in Saudi Arabia after the capital city, Riyadh. The population of the city currently stands at over 3.4 million. It is an important modern commercial hub in Saudi Arabia. Jeddah is the principal gateway to Mecca, Islam's holiest city, which able-bodied Muslims are required to visit at least once in their lifetime. It is also a gateway to Medina, the second holiest place in Islam. The city has been labeled as "different" by the majority of Saudis in an effort to promote tourism in the city, that had been previously perceived as "most open" city in Saudi Arabia.

Amman is the capital and largest city of Jordan. It is the country's political, cultural and commercial centre and one of the oldest continuously inhabited cities in the world. It was named one of the area's best cities according to economic, labour, environmental, and socio-cultural factors. Amman is one of the most liberal cities in the Middle East and Eurasia. It is also one of the most "westernised" cities in the region, ahead of places like Cairo or Damascus. The city is generally reasonably well-organized, enjoys great weather for much of the year and the people are very friendly.

Tel Aviv or Tel Aviv-Yafo, is the second most populous city in Israel, with a population of 404,400. It is the largest and most populous city in the metropolitan area of Gush Dan, home to 3.3 million residents as of 2010. Tel Aviv's White City, designated a UNESCO World Heritage Site in 2003, comprises the world's largest concentration of Bauhaus buildings. Tel Aviv is also a beta+ world city, alongside cities such as Barcelona and San Francisco. Known as "The City That Never Sleeps", its beaches, parks, bars, cafés, restaurants, shopping, cosmopolitan lifestyle and 24-hour culture have made it a popular destination, visited by over 1.6 million foreign tourists annually. Tel Aviv is an economic hub, home to the Tel Aviv Stock Exchange, corporate offices and research and development centers. It is the country's financial capital and a major performing arts and business center.

Dubai  is the most populous city and is one of the seven emirates of the United Arab Emirates (UAE). It is located south of the Persian Gulf on the Arabian Peninsula and has the largest population with the second-largest land territory by area of all the emirates, after Abu Dhabi. Dubai and Abu Dhabi are the only two emirates to have veto power over critical matters of national importance in the country's legislature. It is rather like an independent city-state and is the most modern and progressive emirate in the UAE, developing at an unbelievable pace in the tourist and trade sectors especially. Recently Dubai won the bid to host EXPO 2020, a Universal scale Registered Exposition approved by the Bureau of International Expositions (BIE), Paris.

Bahrain is a small island country situated near the western shores of the Persian Gulf in the Middle East comprising more than 30 islands. It is the site of the ancient Dilmun civilisation. It has been famed since antiquity for its pearl fisheries, which were considered the best in the world into the 19th century. It's an oasis of social liberalism – or at least Western-friendly moderation – among the Muslim countries of the region. It's popular with travellers for its authentic "Arabness".

Istanbul, historically known as Byzantium and Constantinople is the largest city in Turkey and 5th largest city proper in the world with a population of 13 million, also making it the largest metropolitan city proper in Europe and the second largest metropolitan area in Europe by population. Istanbul is also a megacity, as well as the cultural, economic, and financial centre of Turkey. The city covers 39 districts of the Istanbul province. It is located on the Bosphorus Strait and encompasses the natural harbour known as the Golden Horn, in the northwest of the country. It extends both on the European Thrace and on the Asian Anatolia sides of the Bosphorus, and is thereby the only metropolis in the world that is situated on two continents. Istanbul is a designated alpha world city.

Colombo is the largest city and former capital of Sri Lanka. It is a busy and vibrant city with a mixture of modern life and colonial buildings and ruins and a city population of 647,100. Due to its large harbour and its strategic position along the East-West sea trade routes, Colombo has a long history and was known to ancient traders 2,000 years ago.  Colombo is a huge, sprawling city, which can be visited any time of year due to its beautiful tropical climate.

Hyderabad is the capital of the state Andhra Pradesh, India and is located on the banks of the Musi River and on the Deccan Plateau. As of 2010 it is the sixth most populous city and sixth-most populous urban agglomeration in India. It was founded by Muhammad Quli Qutb Shah in 1591 on the banks of Musi. The twin cities of Hyderabad and Secunderabad near Hussain Sagar Lake (also known as Tank Bund in local parlance), both cities have grown so much that now they have become the ambit of a single municipal unit, The Greater Hyderabad Municipal Corporation.  A city rich with history and tradition, Hyderabad now competes with Bangalore, Chennai for the crown of India's IT capital; Microsoft and Google have their India headquarters here. Hyderabad was historically known as a pearl and diamond trading centre, and it continues to be known as the City of Pearls. Many of the city's traditional bazaars, including Laad Bazaar, Begum Bazaar and Sultan Bazaar, have remained open for centuries.

Mumbai, a cosmopolitan metropolis, earlier known as Bombay, is the largest city in India and the capital of Maharashtra state. Mumbai was originally a conglomeration of seven islands on the Konkan coastline which over time were joined to form the island city of Bombay. The island was in turn joined with the neighbouring island of Salsette to form Greater Bombay. The city has an estimated metropolitan population of 21 million (2005), making it one of the world's most populous cities. The city is also famous as the heart of the Hindi-language Bollywood film industry.