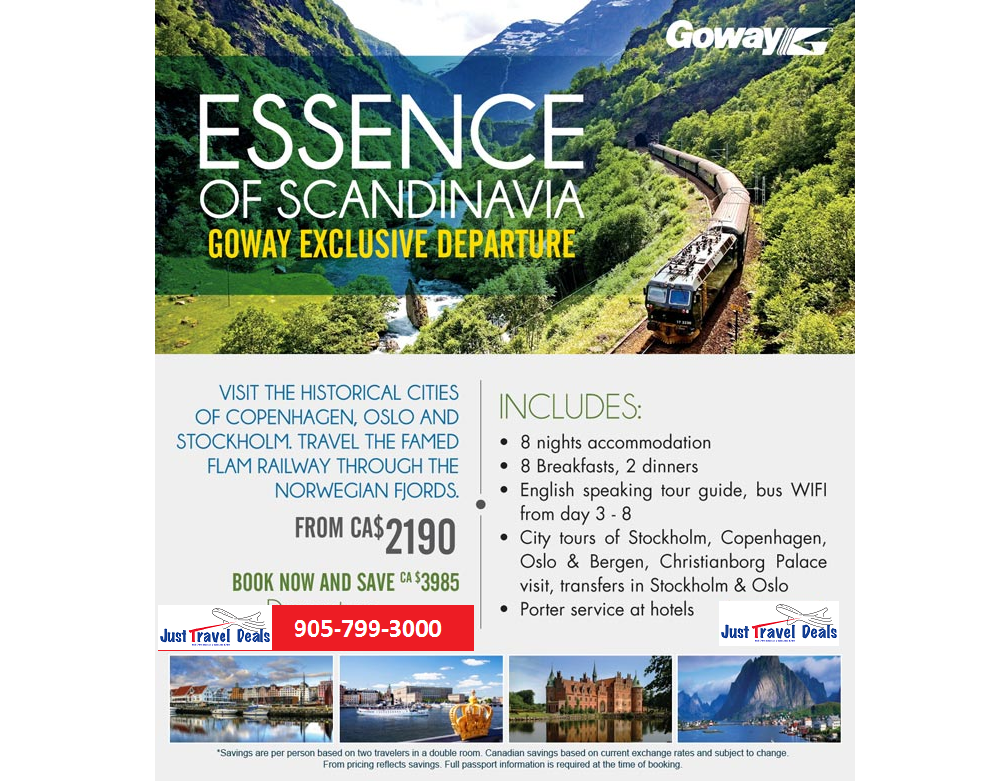 You will visit the following 8 places:

Norway is the westernmost, northernmost—and in fact the easternmost—of the three Scandinavian countries. Best known for the complex and deep fjords along its west coast which stretches from the North Sea near Denmark and Scotland into the Arctic Ocean and has borders with Finland, Sweden and the northwestern tip of Russia. Norway may have a clutch of attractive, cosmopolitan cities, appealing destinations in their own right, but where the country really shines is not in its urban culture, but rather in the low-key, amiable small-town feel that pervades throughout its settlements.

Copenhagen is the capital and largest city of Denmark. This "friendly old girl of a town" is big enough to be a metropolis with shopping, culture and nightlife par excellence, yet still small enough to be intimate, safe and easy to navigate. Overlooking the Øresund strait with Sweden just minutes away, it is a cultural and geographic link between mainland Europe and Scandinavia. This is where old fairy tales blend with flashy new architecture and world-class design; where warm jazz mixes with cold electronica from Copenhagen's basements. You'll feel you've seen it all in a day, but could keep on discovering more for months. Copenhagen is considered a very liveable place because of its cleanliness. It’s considered as one of the very environmentally friendly cities because its harbour can be swum in and about a third of the city’s people use bicycles as their means of transportation. In their downtown area, the places to visit and to be entertained at are the Tivoli gardens and the Town Hall Square. If you want the very cultural and scenic areas the places to see are the Marble church, the Rosenborg castle, and the Christiansborg.

Sweden is a Scandinavian country in Northern Europe of thousands of coastal islands, inland lakes, forests and mountains. It has the world's eighth-highest per capita income and ranks highly in numerous metrics of national performance, including quality of life, health, education, protection of civil liberties, economic competitiveness, equality, prosperity and human development. Sweden, the largest of the Scandinavian countries, boasts a long mercantile history that has made it one of the most culturally open and welcoming in Europe!

Denmark is a Scandinavian country in Europe. The country consists of a peninsula, Jutland, and an archipelago of 443 named islands, of which around 70 are inhabited. The islands are characterised by flat, arable land and sandy coasts, low elevation and a temperate climate.  Denmark is also the birthplace of one of the world's most popular toys, Lego. There is no other better place in the world where one can buy Lego bricks than at the Legoland theme park in Billund. Top it off with a rich, well-preserved cultural heritage, and the Danes legendary sense of design and architecture, and you have one intriguing holiday destination.

Oslo is a county and municipality, as well as the capital and largest city in Norway. Oslo was established as a municipality on 1 January 1838. Founded around 1048 by King Harald III "Hardraade" of Norway, the city was largely destroyed by fire in 1624. The Danish–Norwegian king Christian IV moved the city, rebuilding it closer to Akershus fortress, as Christiania (briefly also spelt Kristiania). In 1925, the city reclaimed its original Norwegian name, Oslo. The diocese of Oslo is one of the five original dioceses in Norway, which originated around the year 1070.

Bergen is the second largest city in Norway with a population of 261,600 as of April 31, 2011. Bergen is the administrative centre of Hordaland county. Greater Bergen or Bergen Metropolitan Area as defined by Statistics Norway, has a population of 386,900 as of April 31, 2011. Bergen is located in the county of Hordaland on the south-western coast of Norway. It is an important cultural hub in its region, recognized as the unofficial capital of Western Norway and sometimes also referred to as the Atlantic coast capital of Norway. The city was one of nine European cities honoured with the title of European Capital of Culture in the Millennium year.

Stockholm - Sweden's capital and largest city, and the most populous city in the Nordic region. Without a doubt, Stockholm is one of the most beautiful cities in Europe. The city is made up of 14 islands connected by some 50 bridges on Lake Mälaren, which flows into the brackish Baltic Sea, and passes the Stockholm archipelago with some 24,000 islands and islets. The city is a cosmopolitan place with both classical and modern architecture, and a captivating Old Town, Gamla Stan. Today, the area is an atmospheric mixture of buildings surrounded on all sides by a latticework of medieval lanes and alleyways.