Lie Flat Beds in Economy Class? This Airline Says, "Yes, You Can!"

An airline has cracked the code to providing some of the same comforts for economy class passengers as their fellow passengers in costlier business and first-class enjoy.
After three years in development, Air New Zealand has revealed the prototype of an innovation that could forever change the way you look at long haul travel – even in coach!
They’re calling it the Economy Skynest, and it’s a groundbreaking concept. A ‘nest’ of six, full-length, lie-flat sleep pods stacked on top of each other like bunk beds, with the added bonus of replacing a chunk of hated, center block of seats (although final placement in different planes can change).
If you love to travel but hate not having enough space to stretch out. Or your company budget doesn’t stretch to first class with lie-flat cubicles… but you still need to arrive at your destination fresh and ready to get to work. We can think of all kinds of reasons Air New Zealand’s Economy Skynest could tick a lot of boxes for you. 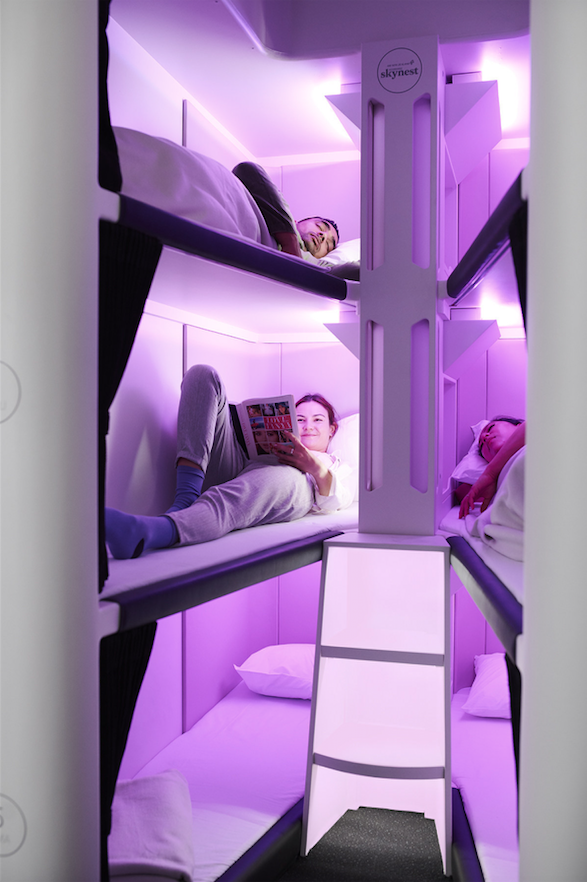 Each single-person pod is over 2 m (more than 6 and a half feet) long, with a minimum shoulder width of 58 cm (23 inches), and comes with a full-size pillow, a blanket and also sheets! as well as ear plugs, privacy curtains and lighting designed for sleep. Air New Zealand is also exploring other features like a separate reading light, a personal device USB outlet, and an outlet for ventilation. All the comforts of a hotel bed… just a little cozier.
And it makes sense. New Zealand’s position on the globe means it operates some of the world’s longest flights, like a non-stop Auckland-New York flight that spends 17 hours and 40 minutes in the air. That’s the flight the company is testing the Economy Skynests on for an inaugural year.
It’s just the latest innovation in comfort for an airline that is at the leading edge of customer-centric design and eco-responsible advances. The Economy Skynest is the next step up from Air New Zealand’s previous game-changer, the award-winning Economy Skycouch.

The row of Economy seats that can be turned into a couch after takeoff so friends or family members can use the space to stretch out changed the way families fly. And further enhancements like a dedicated infant harness enabling infants to stay lying down throughout the cruise phase of flight, a new infant pod which provides extra comfort and protection, and a modification to the existing adult Skycouch Cuddle Belt means it's now certified for two children to be able to share the Skycouch lying side by side.

Given how popular the Economy Skycouch has become, the airline is expecting Economy Skynests to ‘take off’, too, with a focus on the longest of long haul flights. Air New Zealnd anticipates that Economy class passengers would be able to book the Skynest in addition to their regular Economy class seat, so you can be seated for a portion of your flight and able to sleep when you feel like it.
And they expect, as they experienced with the Economy Skycouch, other airlines will explore licensing the Skynest from Air New Zealand so you can enjoy its comforts on many routes around the world.
As aircraft engineering continues to advance to achieve greater feats of fuel economy and enables planes to fly longer non-stop flights, innovations like Air New Zealand’s Economy Skynest will be ever more attractive options when you book your flight.
It may be the most exciting new innovation in flight – that literally puts you to sleep.

Images: Air New Zealand
Copyright BestTrip.TV/Influence Entertainment Group Inc or Rights Holder. All rights reserved. You are welcome to share this material from this page, but it may not be published, broadcast, rewritten or redistributed.